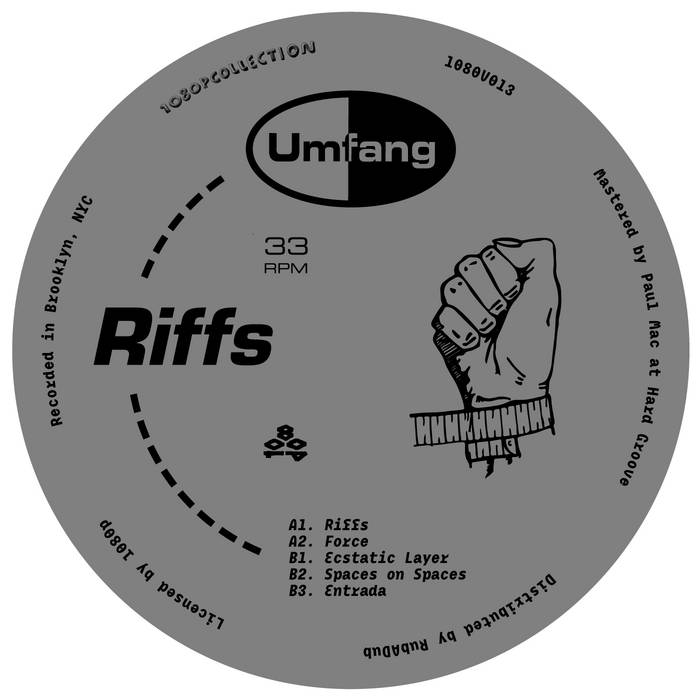 Nic Brown 1080p is one of only two labels (the other is deep drum & bass specialists Nurtured Beatz) whose records are of such consistently outstanding quality, I buy them on sight. Of the 29 (yes, 29 - one or two major labels are less prolific) records they released last year, only UMFANG's "Ok" failed to send me into raptures. Don't get me wrong, it wasn't a bad record, just a could probably do better one, and I'm delighted to say technofeminist, DJ and producer Emma Olson has done just that with knobs on. "Riffs" is a collection so varied (I love a track that begins as house, switches to techno after a couple of minutes then drifts off into ambient territory just as you think you're getting a handle on it), that I'm inclined to categorise it simply as weirdo electronica (and if you can think of a label that has more of that in its back catalogue then tell me now and I'll buy all of it). Though it's virtually impossible to pick a favourite with so much going on in every track, closer "Entrada" is a very strange beast indeed. It sounds like an ambient piece that would rather scratch your eyes out than lull you into a meditative state and UMFANG had all sorts of trouble keeping it beatless. You might think that sounds foolish, but give it a spin an you'll know what I mean. Needed to improve and did in fine style. Favorite track: Entrada.

Revolt of the Apes

Soft bangers and beatless movements on UMFANG’s vinyl debut “Riffs”, the follow up to last year’s 1080p-released cassette “Ok”. On this five-track 12”, the Brooklyn-based producer can be found tripping on ambient and investigating texture as much as percussion throughout.

Discovering the abilities to sequence the Microkorg with Xoxbox changed everything, and these tracks take vivid form and are a logical progression from the previous polyrhythmic techno—footwork thoughts, avoiding 4/4 with simple melodies against landscape-like imagery.

UMFANG is Emma Olson, prolific DJ, co-founder of Discwoman and programmes Technofeminism, a monthly residency at Bossa Nova Civic Club focusing on emerging local talent and an affection for vinyl.